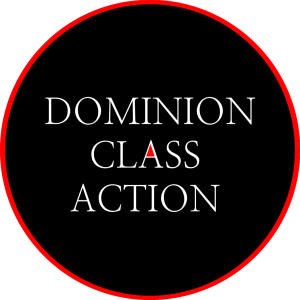 After over a month of research on the events surrounding the 2020 Presidential Election and diligent work by Attorney’s Gary Fielder, Ernest Walker, and staff alongside the Original 8 Plaintiffs, Dominion Class Action was formed in the filing of the Original Christmas Complaint on December 22nd, 2020. By Christmas Day we had our website running and were set to work on behalf of the Plaintiffs. 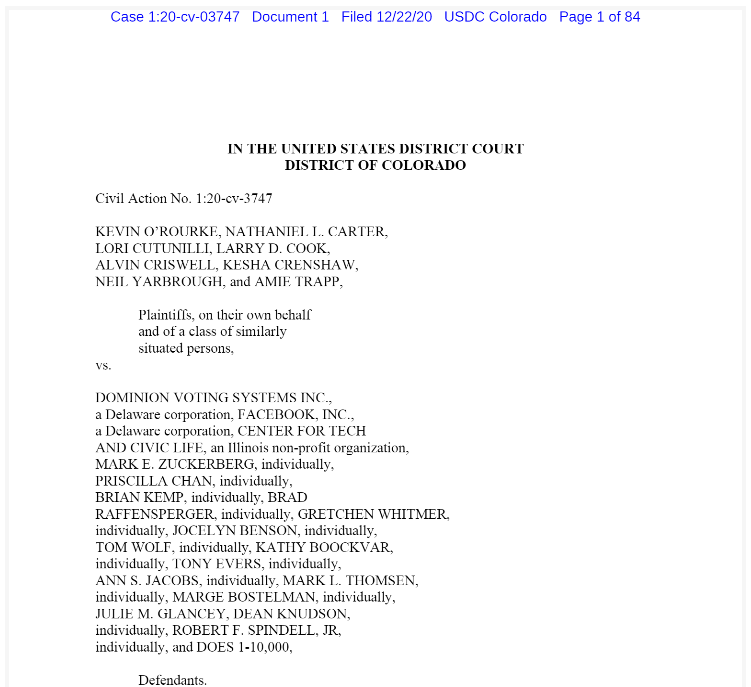 From that momentous launch we have faced unimaginable difficulty in the just struggle for election integrity but have been glad to witness the strength of the American Voter in meeting and aiding the movement to far exceed any and all challenges as we advance forward together towards Justice. Within 3 months we had reached 160 plaintiffs petitioning the courts for redress of constitutional damages in our newly released the Amended Complaint.

All the while plans were laid, and the foundation set for the building of a perpetual movement that would seek the restoration of the peaceful process of fair and equal election while upholding above all the right to suffrage. The 501(c)4 tax exempt social welfare organization, Save Our Suffrage, was established by plaintiffs and early supporters of the new Dominion Class Action, a DBA filed with the Colorado Secretary of State. 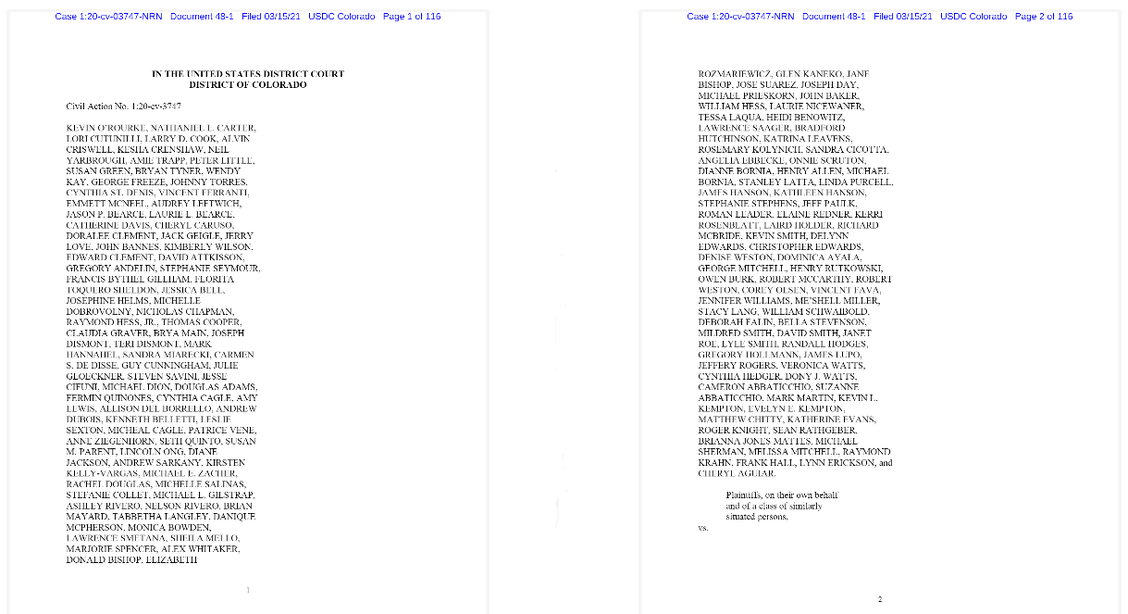 By the time of our hearing well over 400 constitutionally dedicated registered American Voters had proceeded through the process of submitting affidavits to become plaintiffs of the class. Unexpectedly, the District Court rejected the Plaintiffs standing to petition the court and dismissed the Christmas Complaint and incorrectly labeled our attempt to Amend and improve the original as futile. Knowing that the constitution and precedent supports the standing of the registered voter to sue, we pushed on.

The day following the Courts Order, Dominion Class Action exercised its right to appeal with the 10th Circuit Court of Appeal, later releasing the Opening Brief to the appeal. 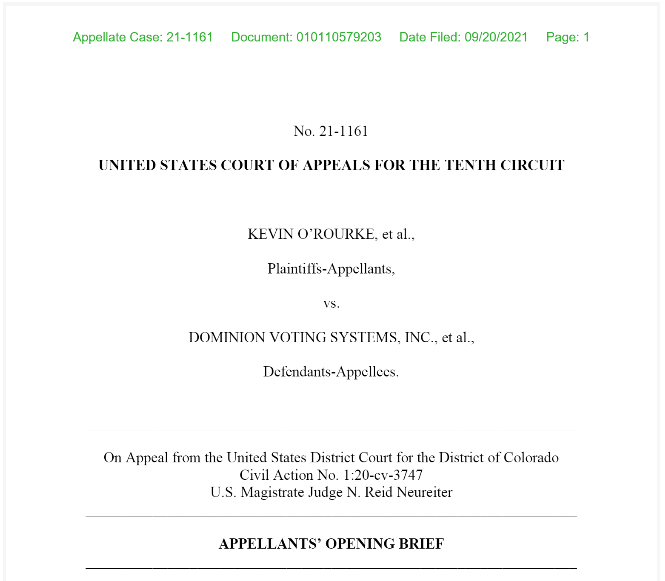 While advocating for their clients and preparing the appeal, Attorneys Gary and Ernie faced a barrage of legal and personal threats including letters warning of Section 11 Sanctions. This was followed by the motions in the District Court to award attorney’s fees against those, brave enough to follow their constitutional duty as officers of the court, upholding the civil rights of the registered American Voter. The mainstream media rejoiced as numerous national and international publications highlighted the awarding of sanctions by the District Court in July. The media largely and inaccurately defamed Gary and Ernie as right-wing trump GOP lawyers and other disparaging remarks. 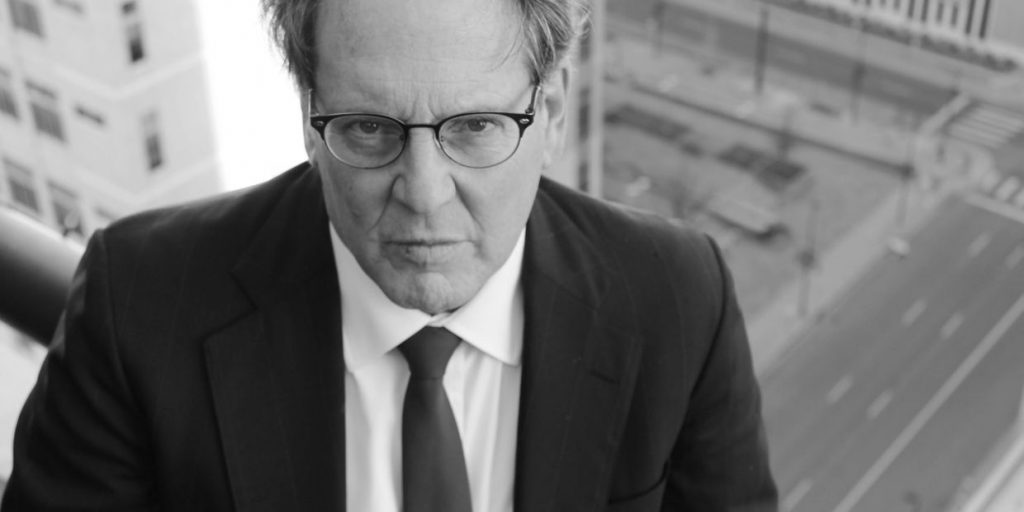 This brought to our offices a flood of hate mail and threats of violence affecting not only the Attorneys and leaders of the movement but also all of the staff and families. We stood strong with the support and well wishes of our thousands of followers and of course with our prospective class of plaintiffs. All the while we were also moving our offices to a new location across the street following the sale of the previous office building to new ownership. We are far from done

In April the appellees filed their response to our opening brief on the issue of the $187,000 in sanctions imposed by the District Court. In their filing, they submitted two separate responses, the first representing the cooperate appellees and the second the individual human appellees who served as officials in PA and MI during the 2020 election. Our optional reply to this response is due next Friday.

10th Circuit Court of Appeals rendered this decision regarding the District Court’s dismissal of our case. While we are clearly disappointed this order of only a few pages focused on a specific perceived error in our case. In contrast to the broad and scathing language used by the District Court Magistrate, the 10th Circuit focused on a single issue that will be easily resolved through a rehearing, the request for which is due next Friday as well. Simply, they don’t yet understand and appreciate the scope and scale of our non generalized grievance. Our class is neither all American People nor some registered voters, rather the class is any and all registered voters in America. For our full official statement please visit our website linked below!

On June 10th, Attorneys Gary Fielder and Ernest Walker, assisted by civil rights activist Jim Wiley, submitted two filings to the 10th Circuit. The first was the Petition for Rehearing with the 10th Circuit in regards to their order affirming the District Courts decision which, if maintained would grant private corporations the immunities enjoyed by government. We felt that this was a misapplication of the law and deals with an issue of such importance, every registered voter’s civil rights, that it should have the consideration of the complete panel of 10th Circuit Justices, en banc. While the Justices denied our request for rehearing the Supreme Court remains an option for us.